This product is no longer in stock

By buying this product, you can collect up to 155 Ahsan reward points. Your cart will total 155 Ahsan points that can be converted into a voucher of QAR 31.00.

Bring unparalleled Wi-Fi performance into your home with the WRT1900AC Dual Band Gigabit Wi-Fi Router from Linksys. Featuring a unique four external antenna configuration and a powerful 1.2 GHz dual-core processor, the router is engineered to support active online households by eliminating dead spots in multistory buildings. Multiple users can simultaneously game online, stream movies, and transfer files without lagging interruptions. In addition to four Gigabit Ethernet ports, the router provides connectivity to wired devices via a USB 3.0 port and dual eSATA/USB 2.0 port, letting you transfer huge files without the wait. The WRT1900AC also is equipped with exclusive Linksys Smart Wi-Fi software for total home network control and is open source ready for advanced users who want to customize their firmware. 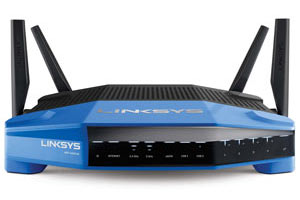 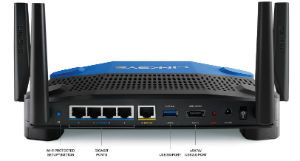 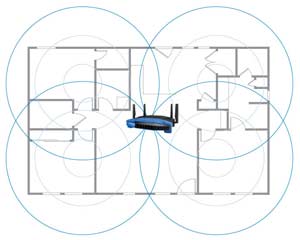 The Linksys WRT1900AC is the industry’s first router to feature four external, adjustable antennas to ensure optimal coverage and maximum signal strength at all times. By utilizing four high performance antennas, the router enhances dual band (2.4 GHz and 5 GHz) performance to eliminate dead zones and spotty coverage in the far corners of your home. Dual wireless bands deliver transfer speeds of up to 1.3 Gbps for a strong, reliable Wi-Fi signal in the home. A high-powered amplifier helps maximize signal strength and coverage, even in multistory homes.

With Wireless-AC technology, the WRT1900AC router leverages Beamforming, an innovative technology that enables the router to strengthen the wireless signal to specific devices, rather than simply sending out Wi-Fi in a general direction. This results in faster network speeds, better wireless range, reduced interference from other devices, and stronger Wi-Fi connections.

The WRT1900AC is built for wired connection to an array of digital devices using the enhanced USB 3.0 or the unique eSATA/USB2.0 combo port. By integrating the eSATA port, users who prefer to attach an external SATA storage device can utilize the eSATA cable that came with their storage unit and benefit from optimal data transfer speeds. The eSATA port can also be used as a USB 2.0 port.

With industry-leading Linksys SMART Wi-Fi software, you can monitor and control your home network at any time, wherever you are. For example, SMART Wi-Fi allows you to restrict Internet access at certain times of the day with parental controls. It also allows you to create unique Wi-Fi passwords for your guests, monitor and add devices on your home network, and check upload and download speeds. In addition, this software allows you to prioritize which devices on your network get the most bandwidth. This enables you to reduce lag times and buffering when you're streaming media or playing online games.

The WRT1900AC integrates a new feature of SMART Wi-Fi called Network Map. Network Map provides a visual overview of your network, allowing you to see all devices on your network, view their online status and signal strength, and also measure how much bandwidth they're using at any time.

Advanced users can further customize the WRT1900AC, which will have open source firmware from third-party websites. Developed for use with OpenWRT, an open-source, Linux-based operating system, users can modify the router to suit a particular application.

Users who own a second WRT1900AC will enjoy a more powerful wireless signal using the SMART Wi-Fi interface. Now you can extend the Wi-Fi signal for both of the router's dual bands (2.4 GHz and 5 GHz) with Wireless Repeater Mode, or just one of the bands with Wireless Bridge Mode. Either option effectively turns the WRT1900AC into a powerful range extender or wireless bridge, adding range and speed to wired and wireless connections on your network.

This product requires a Wi-Fi-enabled computer that has a CD or DVD drive and that runs the Microsoft Windows XP SP3, Windows Vista SP1 or later, Windows 7, or Windows 8 or the Mac OS X Leopard 10.5.8 or later, Snow Leopard 10.6.1 or later, Lion 10.7 or later, or Mountain Lion 10.8 or later. It also requires an Internet Explorer 8, Safari 5, Google Chrome, or Firefox 8 or later.

What's in the Box